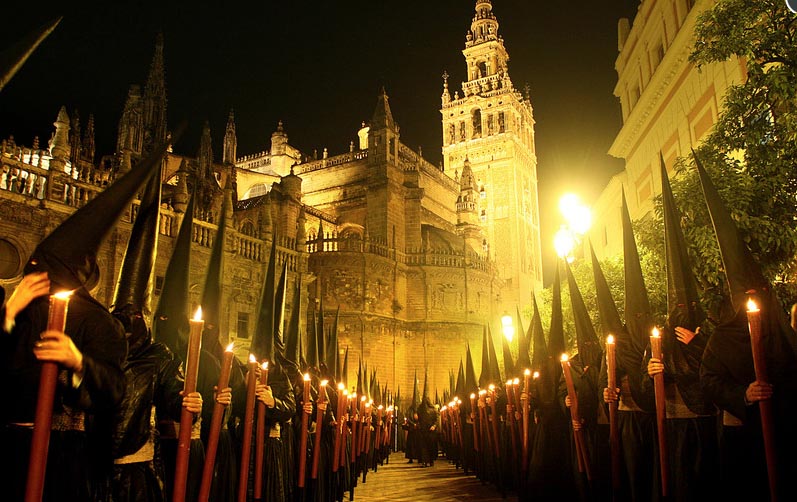 Have you ever wondered how the Spanish celebrate Easter?

The Passion of Christ, or Easter Week, known in Spain as Semana Santa is without doubt the most important celebration in Spain. The festivities begin with the Domingo de Ramos (Palm Sunday) and end with Lunes de Pascua (Easter Monday). It is a celebration of life itself and the whole country comes alive.

Almost every town and city in Spain will have their own Easter celebrations and almost every resident will be involved in some way.In the major cities the processions are of huge proportions, often stretching for miles. Each area, city and town has its own difference in its celebrations. Although they all differ, they portray life, colour, culture, music and dance, all with a very religious meaning.

Everywhere, processions make their way through the streets, carrying religious icons and symbols of their faith. In Seville alone there are over 100 of these images. Semana Santa has to be experienced first hand to be fully appreciated and no words can begin to describe the emotions that flow like water, wherever you go. If you have the opportunity to attend these festivities, one thing is sure, the images of the solemn masses and processions will stay with you forever.

The way in which many villages and towns celebrate Holy Week is so very different and one such example is Almaden de la Plata near Seville. On Easter Sunday, rag and straw dolls representing famous people are placed at different points in the streets of the village. These are finally torn apart and the pieces thrown into the air.

In Castilblanco de los Arroyos, they place the same kind of dolls in the streets but they are later set on fire. The dolls are known as juas or Judas dolls. There are many towns that celebrate with battles between ancient brotherhoods.

In major cities such as Malaga, the processions go on for miles and will last until the early hours of the morning, every night through the Easter week. Children as young as 3 or 4 take part and crowds will swell into hundreds of thousands.