The starting point for this tour is in probably, the most beautiful of the historical Flemish cities -Bruges. From Bruges you will bike across the pleasant countryside of Western Flanders to Ghent. Here you'll breathe in the atmosphere of the old days in the town centre with its impressive Belfort and the St. Baafs-Cathedral. Next, you’ll visit Oudenaarde where you’ll find flamboyant gothic architecture, timeless tapestries, some of the best brewed beers and areas where French, Spanish and World Wars have been fought. You’ll also visit Tournai, which was once an important cathedral city for the pilgrims during the Middle Ages.

Once in France, you’ll still follow the Schelde River while cruising the wonderful old canal of St. Quentin. You will pass through the tunnel of Riqueval to the historical city of St. Quentin where the gothic basilica and the town hall are well worth a visit. Later you’ll journey through the valley of the Somme - a battlefield in WWI, in a southern direction to Compiegne. From the middle Ages on, this part of France used to be the centre of the French kingdom. You’ll follow the valley of the river Oise with its varied scenery and arrive at Conflans. Here the Oise River flows into the Seine and the boat follows this river upstream into the direction of Paris. You will sail the Seine river right through Paris, along the Eiffel Tower and the Louvre Museum to our mooring dock in the centre of Paris.

Return to Bruges: there is a good train connection between these two cities. 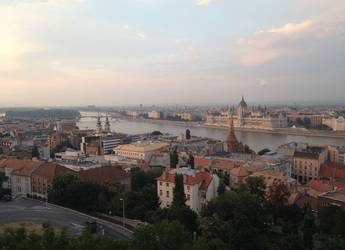 150
The maximum capacity that this boat may carry is: 150 people Enter your email address and we will deliver your "Bruges-Paris 15-day Bike & Barge Tour (FLR)" brochure straight to your inbox.