Your tour starts not far from Notre Dame, in the famous capital of France - Paris. You will follow the Seine River downstream passing the Louvre and the Eiffel tower into Conflans. From there, you'll cruise on through the Val d’Oise to Compiegne. A visit to the Palace of the French Kings is included in your tour. You’ll then follow a wonderful old canal to the historical city of St. Quentin. Make sure you visit the Gothic basilica (church) and the town while you are there. Next, you'll sail through the tunnel of Riqueval and head for Belgium. You’ll visit Doornik, once an important halting-place for travelling pilgrims and Oudenaarde – a well-known centre for tapestry production. Many tapestries are housed in Oudenaarde’s flamboyant, Gothic style town hall. Another important highlight on the tour is a visit to Ghent with its imposing Belfort and the St. Baafs Cathedral.Your final destination is Bruges, probably the most beautiful of all historical Flemish cities made famous for its hand-made lace. Immerse yourself in the atmosphere of days gone by!

If you would like to rent a bike or e-bike, please contact our office when booking: [email protected]

Not all mentioned highlights can be visited during the short cycling option.

In case you prefer a day of rest, you can skip the bike tour and relax on board while cruising to the next town. 96
The maximum capacity that this boat may carry is: 96 people 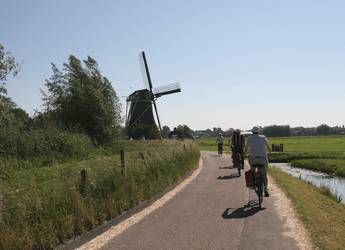 Enter your email address and we will deliver your "Paris-Bruges 15-day Bike & Barge Tour (FLR)" brochure straight to your inbox.