Does it get any better than this? Combine a week of sailing and living on board a classic clipper built in 1913 on Holland’s lake IJsselmeer with cycling touring to a long list of historic towns and villages. There really is no better way for anyone interested in sailing and cycling to explore what is a truly historic, beautiful and fascinating part of the world!

Your exciting tour of discovery on a stylish and beautifully appointed sailing clipper starts and finishes in Amsterdam and takes you along large sections of the IJsselmeer coast over the course of a week of sailing and cycling. Lake IJsselmeer was created in 1933 when the 32 km long “Afsluitdijk” (Enclosure dike) was constructed as part of the larger Zuiderzee land reclamation project. The construction of the Afsluitdijk across the Zuiderzee (a salt water inlet of the North Sea) resulted in the salt water inlet becoming the freshwater lake IJsselmeer. Today the many historic towns and the villages on the IJsselmeer are testament to a time when ships from the Dutch East India Company sailed from here to source their precious cargos of spices from across the seas. The entire region is crisscrossed by excellent cycle paths that you can pedal along to discover the charm of towns such as Monnickendam, Hoorn and Enkhuizen.

On the eastern shore of the IJsselmeer you will visit the provinces of Friesland and Flevoland and the former islands of Urk and Schokland. On the final day of your tour, wind and weather permitting, you will experience the thrill of sailing under full sail as you return to Amsterdam where you will have plenty of time to enjoy a last evening exploring the beautiful and exciting capital of The Netherlands.

The sailing ship has ten twin cabins (6 m² – 65 sq.ft.), which all have been fully renovated recently. Eight cabins are situated on the lower deck, two on the upper deck. All cabins have two single beds. Some of the cabins can be booked as a three-bed or four-bed cabin (the third and fourth beds as bunks). Each cabin has an en-suite bathroom with shower, toilet and basin. All cabins have central heating and a window that can be opened. On the lower deck, the ship offers a large lounge with a snug seating corner, dining area and a bar. Wi-Fi is available. On the upper deck offers a beautiful sundeck with benches and tables where you can relax on nice evenings and enjoy the scenery while sailing

Included in the Sail and Bike Tour:

Tour and accommodation on board in the booked category 8 days/7 nights (Saturday-Saturday) from/to Amsterdam
Full board (7x breakfast, 6x picnic lunch during bike tours, 7x three course dinner)
Use of bed linen and towels (change of towels on request); cabin cleaning
Welcoming drink on the first evening
On board tour guide by the crew(multilingual) with daily briefings of the bike tours
Printed instructions and detailed maps for daily individual self-guided bike tours
Daily complimentary coffee and tea between 3 PM and 4 PM

If you would like to rent a bike (80 euro) or e-bike (180 euro) , please contact our office when you book: [email protected]

Child reduction: 15% reduction for children up to incl. 15 yrs old. Only applicable when staying in the cabin with 2 adults

In Sail & Bike Tours Europe, you could also check out these tours 34
This tour has the capacity for 34 people 41
This tour has the capacity for 41 people 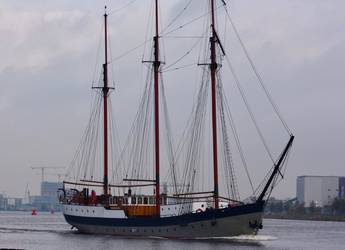 24
This tour has the capacity for 24 people