This tour explores southeastern Sicily and the famous baroque towns of the Val di Noto. The Spanish occupied this area in the late 17th century when 45 towns were destroyed by a single earthquake in 1693. In rebuilding the cities in the region they left a legacy of the most significant collection of baroque churches anywhere. Add to this the culinary delicacies (like the famous chocolate from Modica and local seafood) of the region, the famous red wine "Nero d'Avola" and the "Moscato di Noto" and you have an unforgettable bicycle ride. The ride takes you along the coast of southeastern Sicily to the southernmost point of the island. This is a perfect tour in the Spring and Fall. Add mileage to the easy day rides if you want more exercise or just take it easy and enjoy Sicily!

Included in this tour

Check out our other Cycle Tours in Italy

Route notes were excellent! We had no problem and it was nice to go at our own pace! The self guided tour of the Baroque towns of south east Sicily is perfect! We would highly recommend. Wouldn''t change a thing! Location of the hotels was excellent. Walking distance to historical sites, and great restaurants. Service was truly amazing! We enjoyed the whole experience. The scenery, from mountains to oceans, the towns, so unique and awe-inspiring; the accomodations clean and varied, all very enjoyable; every Baroque town had a lot of history and appeal; the food was incredible; the Sicilian people were friendly and helpful; the weather was perfect; and the local staff was available to answer our questions at all times. We are not avid cyclist, and we are in our late 50''s so the elevation, hills and distance was perfect for our ability. A challenge, but we were able to cycle up every hill! We liked that there were options for distance every day. So we could take the shorter route or the longer route, depending on how we''re we''re feeling.- 2018

We had many beautiful days and a number of really good evening meals (often recommended by hotel staff). We were also amazed by the cities of Ragusa, Noto and Syracuse (Ortigia), and were lucky enough to be in Ortigia for the St Lucia celebrations - that was probably the real high point! The trip was superb overall. - 2017 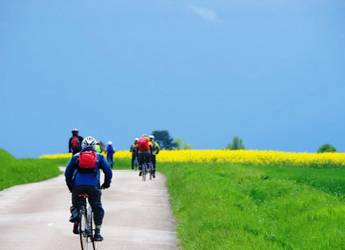 Enter your email address and we will deliver your "Eastern Sicily from Palazzolo Acreide to Siracusa (7-days)" brochure straight to your inbox.